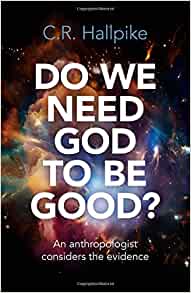 Order Your Copy OfDo We Need God To Be Good?

Do We Need God To Be Good?
An Anthropologist Considers The Evidence

The 'God Debate' is alive and kicking as never before, and Christopher Hallpike's book is a significant contribution to our understanding of New Atheism, morality, religion and reason. Lively and highly stimulating, it offers an engaging and thought-provoking account that will generate much debate and discussion, and is an excellent book for anyone seeking to understand some of the key philosophical, moral and religious issues of our time. -Professor Martyn Percy, Dean of Christ Church, Oxford

To know how to live do we need God and religion, or, does religion only produce wars, hatred, intolerance and unhappiness? Does giving up God mean giving up morality, or, can we finally live a peaceful and fulfilling life as atheists by following science and reason instead? The anthropologist Christopher Hallpike has spent a lifetime's research on the morality and religion of different cultures around the world, and shows that trying to base a moral life on atheism and science actually has some very nasty surprises in store for us.

About Do We Need God To Be Good?

Humanists are always saying that, as atheists, they can be as honest, decent, and generally good citizens as Christians, and speaking as an anthropologist I quite agree with them. It is a fallacy to suppose that without God all hell breaks loose, because a great deal of our morality does not come from God at all, but from human nature and from our experience of living in society. We do not need God to tell us that murder, rape, theft and general dishonesty are wrong, because we can see for ourselves that these are harmful both to individuals and to the social order on which we all depend. In the same way we could not call God just and merciful unless we already knew what justice and mercy meant from our social experience.

The real moral problem for Humanists comes from another direction – their belief that the material world is the only one, and therefore that we are just another animal species, ‘not so special after all’, as biologists are always telling us. In this Darwinian world, which they thoroughly approve of, the idea of human rights automatically becomes meaningless; they originally emerged in the Christian context of Man as made in the image of God, but without this theological foundation there is only the survival of the fittest. While Humanists never seem to ask themselves where their precious rights come from, Nietzsche was much more clear-sighted and was particularly contemptuous of the Humanists of his day who could not see that their favourite ideas of liberty, equality, and fraternity had been obliterated by Darwin.

While it is enlightened self-interest to be loyal to our own society in the struggle for survival, we need have no concern at all for the well-being of foreigners. Warfare, especially between different ethnic groups, is perfectly natural and fighting them for the control of natural resources and if necessary exterminating them would be quite normal biological processes. Biologically speaking, the idea of human equality is absurd because there are obviously vast natural inequalities between different populations, and between different individuals. Just as some  populations can be described as losers in the battle of life, some individuals are obviously losers too, so why should we not despise the poor as failures and exploit them instead of feeling compassion for them and trying to improve their conditions of life? Human life as such has no special value, and not only abortion and infanticide but the extermination of the old, sick, mentally retarded and no doubt other burdens on society would seem quite justified. Why should those with political power not use it for their own gratification and the pleasures of tyranny, and why should we all not indulge ourselves as much as we can with the physical pleasures of life, especially sex and drugs, since life has no other meaning?

I am sure that Humanists generally would deplore all this, but that is simply because they have not thought through the implications of materialist atheism and are still under the influence of the Christian civilisation in which they were reared. But the values of our civilisation cannot remain alive indefinitely without the religious belief that inspired them. Public moralities which dispense with God tend automatically to go in one of two directions. The first is worship of the individual and the Self, which is the inherent direction of the modern Western world, in which humility and self-denial are increasingly seen as morbid and ridiculous, while narcissism and self-admiration, greed, material self-indulgence, and the assertion of individual rights against the common good are increasingly pervading society. (Are Humanists really proud of all this as a form of liberation from religion?)

The other direction is the worship of the state, and the last hundred years have given us plenty of opportunity to observe the benefits of being ruled by dictatorships of atheist rationalists. It is rather obviously not the case that professedly atheist political regimes have been humane and of high moral calibre; on the contrary, they have all been exceptionally brutal, corrupt, and tyrannical, based on lies and the systematic degradation of personal relations by their complete contempt for the moral dignity of the individual. This alone should cure us of the delusion that no longer believing in God is the key that will somehow release a tide of good will among men.

It is only the worship of God that can deliver us from these alternatives, because only a Divinely ordered world can maintain a proper balance between the claims of individual and society. God requires us, on the one hand, to respect the social order, to show humility in our relations with other people, and to restrain our physical appetites, but on the other requires the state and society to respect the dignity of the individual and the claims of spiritual life. The moral unity of the human race as children of God, who loves each individual, and the superiority of spiritual over material values and of humility over pride only make sense in a religious context.

Order Your Paperback or Kindle Copy

We use cookies on our website to give you the most relevant experience by remembering your preferences and repeat visits. By clicking “Accept All”, you consent to the use of ALL the cookies. However, you may visit "Cookie Settings" to provide a controlled consent.
Cookie SettingsAccept All Reject All Read More
Manage consent

This website uses cookies to improve your experience while you navigate through the website. Out of these, the cookies that are categorized as necessary are stored on your browser as they are essential for the working of basic functionalities of the website. We also use third-party cookies that help us analyze and understand how you use this website. These cookies will be stored in your browser only with your consent. You also have the option to opt-out of these cookies. But opting out of some of these cookies may affect your browsing experience.
Necessary Always Enabled
Necessary cookies are absolutely essential for the website to function properly. These cookies ensure basic functionalities and security features of the website, anonymously.
Functional
Functional cookies help to perform certain functionalities like sharing the content of the website on social media platforms, collect feedbacks, and other third-party features.
Performance
Performance cookies are used to understand and analyze the key performance indexes of the website which helps in delivering a better user experience for the visitors.
Analytics
Analytical cookies are used to understand how visitors interact with the website. These cookies help provide information on metrics the number of visitors, bounce rate, traffic source, etc.
Advertisement
Advertisement cookies are used to provide visitors with relevant ads and marketing campaigns. These cookies track visitors across websites and collect information to provide customized ads.
Others
Other uncategorized cookies are those that are being analyzed and have not been classified into a category as yet.
SAVE & ACCEPT
Powered by